Episode 32 On the Rocks Politica 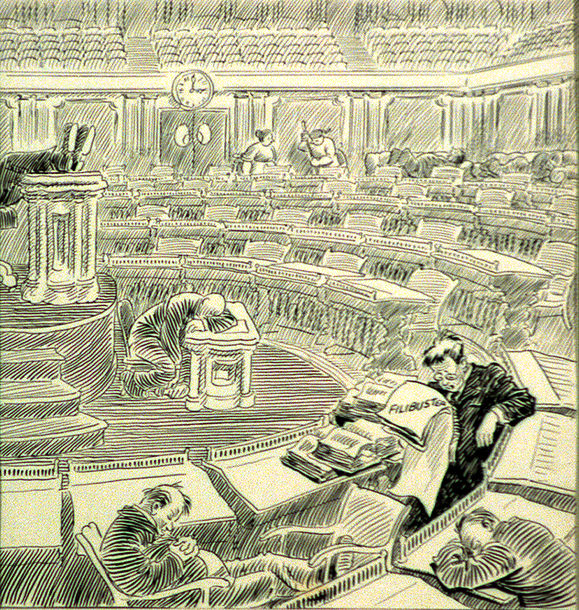 Cartoon depicting a Senate filibuster by artist John T. McCutcheon, published in the Chicago Tribune, May 26, 1928.
credit: Library of Congress

In a Wall Street Journal Op Ed on Monday, June 21 two lobbyists close to Senate Minority Leader Mitch McConnell and former House Speaker John Boehner gave us a patronizing look at how our political elite consider the vagaries of ‘more democracy’ or direct governance through voting.

Mike Solon, a former assistant to McConnell, and Bill Greene, a former outreach director for former House Speaker John Boehner; both of which are now lobbyists argued that thefiibuster as we know it in our modern sense protects “political nobodies” from having to pay attention to politics. If legislation could pass by a simple majority, Americans would have to get involved. The two men suggest the country is best lead by a minority of senators.

“Eliminating the Senate filibuster would end the freedom of America’s political innocents,” they write. “The lives that political nobodies spend playing, praying, fishing, tailgating, reading, hunting, gardening, studying and caring for their children would be spent rallying, canvassing, picketing, lobbying, protesting, texting, posting, parading and, above all, shouting.”

We should also mention the op ed made reference to the filibuster in its current form as having been a construct of the founders who ratified our Constitution of 1787.  This is highly inaccurate.  The current filibuster was devised in 2008 and the earlier mechanism, the one we know for Senators reading frivilous literature to run down the clock first came into being in the first third of the 19th century.

Read up on the history of the Senate Filibuster

In this weeks episode we explore the history of the filibuster, the patronization of our electorate by the elite and we find out just what Bruce Chester, a registered republican, thinks is behind the party’s seeming descent away from democracy.

Our episode starts with co-host Scott M. Graves announcement he is running for City Councillor-at-large in the Chair City, Gardner, MA (Gahhhdnah, hey!).  Otherwise affectionately referred to as G Vegas.

by On the Rocks Politica | Public funding for R&D plus: It doesn't pay to be gay in the MA GOP

by On the Rocks Politica

by On the Rocks Politica | History of Income Inequality

by On the Rocks Politica | The Surge in Anti-Protestor Laws