Gardner Iron-Dispatches from the Arena XXXII 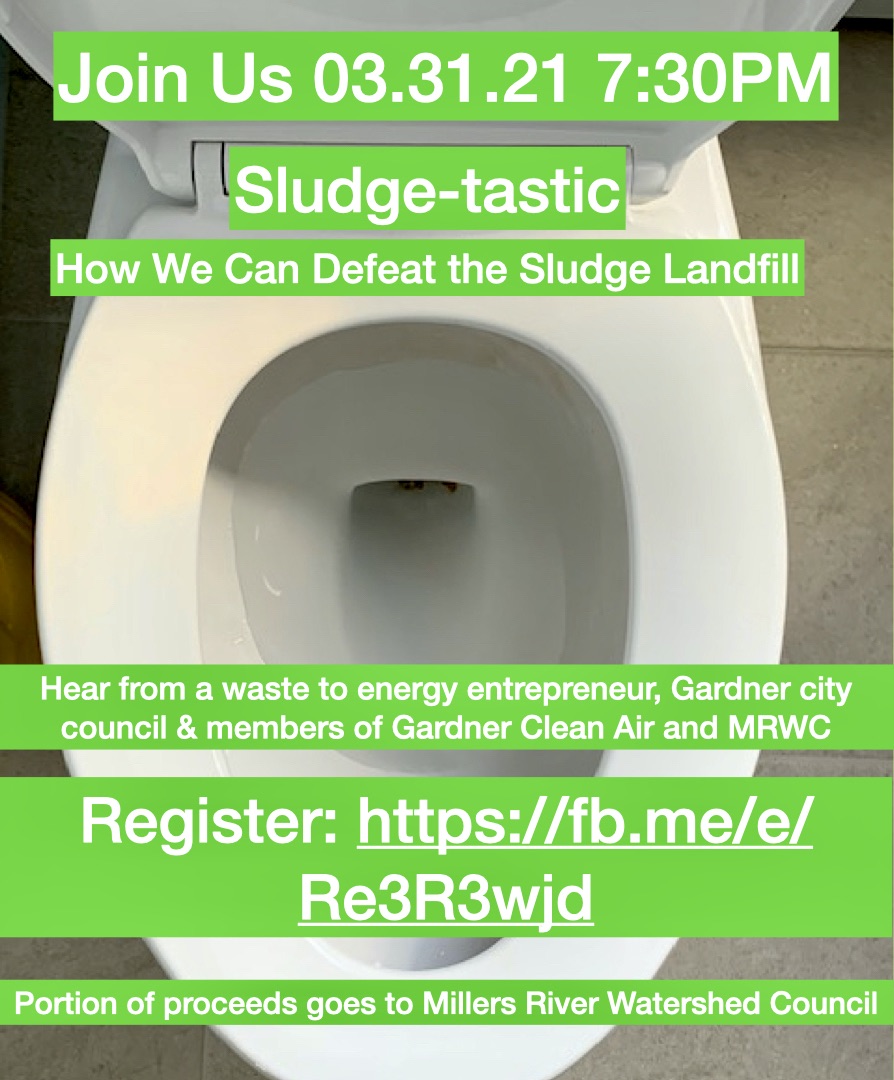 To pay for a consultant “to answer City Council questions about Sludge Dump expansion.”  No one is sure what this money went to.  That was 8 years ago.

The City Council voted to pay for a “REQUIRED” Facility Plan (or “roadmap”) to figure out what needs to be upgraded and repaired at the Wastewater Treatment Plant.  The word “REQUIRED” is all caps and underlined because that is how it was presented to the City Council.

NOTE: This is the City Council first action upon the reality and fact that the Wastewater Treatment Plant (“WWTP”), not the Sludge Dump, needed to be upgraded.  This had nothing to do with the expansion of the Sludge Dump.

To pay for the Headworks upgrade design plan. As told to the City Council, “This money request does not include ANY construction expenses (all caps are original).”

City Council advised that the Mass. Dept. of Environmental Protection (“DEP”) concluded that the Wastewater Treatment Plant (“WWTP”) Headworks (where all sewer/wastewater comes into the WWTP) “is antiquated (50 years old) and in dire need of an upgrade.”  Drop Dead Date to have a completed Headworks design plan and specifications told to the City Council to be October 15, 2014 (about 5 months from this City Council vote to spend $368,500) to qualify for low-interest bonding.

Estimated cost to actually construct the upgrades to the Headworks is told to the City Council to be $5,000,000 – which, again, is not part of this Agenda item that includes no construction.

NOTE: This is the City Council second action upon the reality and fact that the Wastewater Treatment Plant (“WWTP”), not the Sludge Dump, needed to be upgraded.  This had nothing to do with the expansion of the Sludge Dump.

To pay for the Owner’s (the City’s) Project Manager (“OPM”) for the Wastewater Treatment Plant (“WWTP”) upgrades.

The City Council is told that the $214,780 “is needed for the oversight, review, and any other necessary services required for the design of the Headwork’s Sludge Handling (i.e., dewatering equipment – centrifuge system), and Denitrofication at the WWTP.”

NOTE: This is the City Council third action upon the reality and fact that the Wastewater Treatment Plant (“WWTP”), not the Sludge Dump, needed to be upgraded.  This had nothing to do with the expansion of the Sludge Dump.

DPW tests (“pilots”) new dewatering equipment (the Centrifuge Units) at the Wastewater Treatment Plant (“WWTP”).  In a letter 15 months later (dated October 14, 2016), the City Council was advised that the City had piloted the new dewatering equipment (two centrifuge systems) and crunching numbers relative to an expansion of the Sludge Dump compared to hauling the Sludge out of the city.  Again, regardless of which option the City chose, the centrifuge system was going to replace the old Belt Filter Press (BFP) that had to be replaced (due to cost and efficacy).  The City Council was advised in June 2016 that the City had “determined that a centrifuge would be the best alternative (to replace the old Belt Filter Press) for dewatering the City’s wastewater sludge.”

No one ever disagreed with that. But, it had nothing to do with voting “yes” to expand the Sludge Dump because we were getting the centrifuge even if we hauled the Sludge out of the city.

Based on years of advisory information, and based on many written materials provided in connection with this Agenda item #9686, the City Council is presented with the following resolution to vote on:

“Endorsing the Department of Public Works (“DPW”) Plan to upgrade the Dewatering Equipment and pursuit of a new/expanded sludge landfill.”

The City Council divides the vote.  The first vote is to endorse the upgrade the old dewatering equipment (known as the Belt Filter Press) with a Centrifuge; the second vote was to endorse the City’s idea to “pursue” the expansion of the Sludge Dump.

The first vote was a fait accompli – the City Council had already appropriated close to One Million Dollars toward the Wastewater Treatment Plant upgrades – which all included replacing the old dewatering equipment, which the City Council was told as far back as April 2014 needed to be replaced – see, above, Agenda #9218; see also August 2015, above.

In fact, in the City Council materials was a letter from our consultant/engineer (CDR Maguire, Inc. – Rob Sims) in which it was an accepted part of the WWTP upgrades that the old dewatering equipment (the Belt Filter Press, or “BFP”) would be replaced with new technology – which is a “centrifuge system” – and CDR Maguire, and the City in other communications to the City Council, assumed the use of the centrifuge system in their estimates of how much it would cost to truck the Sludge in or out of the city.

Also in the materials was an email from Mayor Hawke in which he stated that the City Council was holding up the necessary upgrades to the Wastewater Treatment Plant (“WWTP”).  The Mayor stated that the City Council needed to vote for the endorsement “so that we may get on with the business of upgrading our Waste Water (sic) Treatment Facility and expanding the sludge landfill.”

The City Council was not holding anything up.  In fact, the City was already moving forward with the WWTP upgrades (and had spent close to a million dollars in that direction, see above).

As part of the materials, the City Council was advised that the City was piloting this new dewatering equipment and crunching numbers relative to an expansion of the Sludge Dump compared to hauling the Sludge out of the city – which is another example of the fact that regardless of which option the City chose, the Centrifuge system was going to replace the old Belt Filter Press (BFP) that had to be replaced.

As part of the materials, the City was told “The decision to move forward with the design and construction of Centrifuges would ultimately mean the expansion of the Sludge Landfill off West Street” (this was the only part of the letter that was in bold print).  As we see above, that was an inaccurate statement – the Centrifuge upgrades were going into the WWTP even if the City Council voted “no” on expanding the Sludge Dump.  In fact, in May 2015 the City Council got a 12-page report from CDR Maguire in which the consultant advised us that we had two viable/affordable options: 1) dewater and expand Sludge Dump, or 2) dewater and haul dry Sludge Cakes out of the city.

In another opinion from our consultant in February 2016 (10 months before this December 2016 City Council vote) the City Council was advised that we could 1) dewater/expand Sludge Dump, 2) dewater/haul Sludge away, or 3) haul liquid Sewer Sludge (don’t dewater).  But, hauling liquid Sewer Sludge was too expensive (it would cost at least $500,000 to “retrofit” the WWTP – just to have watery Sludge thereafter, which costs more to truck out), and was “the most volatile” and “unknown” option.

In all the materials, the City Council was led to believe that there were only two options:  dry the Sewer Sludge with a Centrifuge and 1) expand the Sludge Dump, or 2) truck it out of the city.  The latter option was more expensive – by about one Cumberland’s coffee per week per family.

The City Council votes (11-0) to endorse the Department of Public Work’s (“DPW’s”) plan to go with the Centrifuges (again, this was always a no-brainer), and votes (10-1, way to go Councillor Marc Morgan) to endorse the Mayor’s idea “to pursue” an expansion of the Sludge Dump.

One and one-half years after the 2016 “endorsement,” the City Council appropriates $100,000 “for professional engineering and geotechnical services for the preparation and submittal of permitting documents” regarding the “proposed Sludge Landfill expansion.”

The plan was to begin the expansion of the Sludge Dump in the “spring 2019.”

As noted in the materials, “This request (for $100,000) does not include any funds for future construction.”

Three years after the City Council’s “endorsement” vote, the City Council appropriates $340,000 “for the permitting, completing the design, and bidding” of the expansion of the Sludge Dump.

In the materials from the City, this statement is made to the City Council: “As you are aware, the City Council approved the expansion of the landfill a few years ago.”  But, what the City Council in fact “approved” was an “endorsement” for the City to “pursue” the idea of expanding the Sludge Dump.

As noted in the materials, “This money request (for $340,000) does not include ANY construction expenses (all caps original).”

Discover the effects this sludge landfill will have on conservation, economic development and local politics from M the Media Project.

by Gardner Iron | Was Gardner's City Council Hoodwinked into supporting the sludge landfill?

Essays from an Artist: Dealing with 177 West st. Gardner: What is wrong with city planners?

THE SLUDGE-TASTIC CITY OF GARDNER!

by Gardner Iron | Gardner (MA) has a Sludge Problem

by Gardner Iron | Do we really want to expand our sludge landfill?